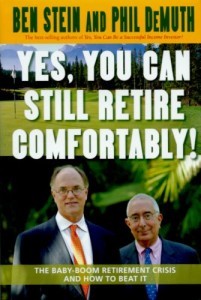 When the retirement crisis is actually upon us, you’ll read human-interest stories in the newspapers about people who once seemed to be well-off, but who now have nothing and don’t know what to do. And actually, you won’t even need to read about it in the papers, because their numbers will include your friends.

At the start of 2000, the total equity value of all publicly traded companies in the world was $36.1 trillion; the value of every bond in the world was $31 trillion. So even if you owned the entire global stock and bond markets, you wouldn’t have enough money in the bank to pay for Social Security and Medicare—you’d still be $5.3 trillion short.

Our government is running a gigantic Ponzi scheme, using the money coming in to pay off the first investors, not investing the money on behalf of current payers, and the situation is unsustainable. As economist Herbert Stein pointed out, if a trend can’t continue forever, it will stop.

The bitter truth is this: Those who have saved for retirement are likely going to be made to pay for those who haven’t, through some process of governmental confiscation of their wealth.

RE: 401(k) Plans: Somehow, a lunchtime PowerPoint presentation plus a raft of confusing marketing materials and small-type prospectuses from the mutual fund “families” don’t seem to be turning us into a nation of crackerjack investors.

We say this to the Boomers and Gen Xers: Nobody is coming to save you. No Santa Claus is going to appear. If you want to retire comfortably, you’re going to have to save yourself.

Consider the fact that if everyone were to save equally, then this would confer no net advantage on anyone. We’d all be pitted against each another to exchange the same quantity of stocks and bonds for the same goods and services from younger Generations X, Y, and Z. But if some save and some don’t—a state of affairs we deem certain—then the retirees who have assets will be living large when their counterparts who failed to save will find the cupboards bare.

How much will you really need to have in savings when you retire? Like all long-range questions with many intervening variables, this is extremely difficult to answer with precision. However, the inherent indeterminacy doesn’t mean that you should sweep it under the rug, pour a martini, and forget about it. Even a glance at the numbers will sound a Klaxon warning: You probably need to save more—a lot more—than you reckoned on, starting immediately.

The possibility of dipping into principal is a foregone conclusion for all but the richest of the boomer generation. It’s the prospect of running out of money that should get our attention.

Here’s nature’s cruel joke on retirees: You’ll probably have all the money in the world later, when you can’t spend it, but you only get a pittance at the beginning, when you really want it.

The $64 question: How can you channel the money from the pot of gold that likely awaits you at the end of retirement into your lifestyle today? How do you siphon the money from the bank in Tomorrowland to your bank on Main Street? How can we bring Oz back to Kansas? We have to proceed carefully, because if we spend even a little bit too much money today, the fortune waiting for us can disappear into the phantom zone, and we will run out of money.

There are three measures you can take if you don’t have enough money to see you through retirement: putting your assets into immediate annuities, relocating to an area with a lower cost of living, and taking out a reverse mortgage. Individually, or in some combination, they just might be enough. Each has its drawbacks, so these aren’t steps to be taken lightly. But they can make a tremendous difference to your quality of life in retirement.