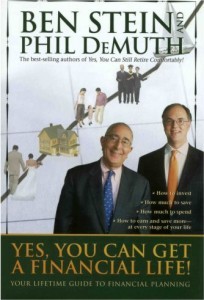 For most Americans, life presents a series of financial challenges for which they can prepare. Yet, for most of us, most of the time, the preparation we make for these predictable financial crises of modern life is comparatively crude. We put more thought, with better planning tools, into what we will do for our summer vacation, or what car we will buy, than, say, what we will live on after we retire. This is a serious mistake.

A highly important thing you can do to influence your lifetime wealth is to be a person of good character. By this, we mean a person who is honest, trustworthy, reliable, and hardworking.

Connections in life are essential. Almost everything good that comes your way in life will happen as the result of some personal connection. While doors may open for you because you fill out an application and mail in a resume, more often than not it will be because you happen to know someone who knows somebody who happens to be the key person. Of course, once you have the opportunity, then it’s up to you to deliver. But connections – that’s somebody handing you the football. Without them, you can sit on the bench for a long time.

You know how we’re constantly being admonished not to judge by appearances? The reason for this is simple: Everyone judges by appearances.

Psychologically, if you are inclined to say, “I’ll pay for it tomorrow” when you are in your twenties, you will also be predisposed to say it in your thirties, forties, and fifties – and then eventually you are staring at an old age of poverty and despair because you have no savings.

Aren’t you entitled to have the same things others seem to have? The bitter truth is that you’re only entitled to have what an honest accounting says you can afford. The key difference between people who are able to save and those who are not is that people who save are able to do without vanity and prestige items. Cars, furniture, vacations, and recreation expenses, the items which allow young people to display their wealth and their prestige, are also the items that wreck the possibility of saving.

The flip side of overspending, and the real hidden damage, comes from forgoing the opportunity to save. It’s not the closet full of shoes that’s the problem; it’s the lack of an IRA. This missed opportunity, painless and invisible at the time, will nevertheless lead to huge problems later in life. Today a whole generation is entering retirement with insufficient savings. How will they fare? No one knows. For many of them, it’s not going to be pleasant. Money saved in your twenties has a miraculous power to grow and compound over time, as the dividends, coupons and interest are reinvested. This doesn’t add up to much in the short term, but over the long term the consequences are miraculous. If you don’t start saving in your twenties, there may not be a long term. Wait until your forties and all you’ve got is a short-term, and the only way to grow your savings is by stringent self-denial.

Saving and consumption are on a see-saw. Spend more today, and we will have less to consume tomorrow. Save more now, and we have more to consume later. While this seems obvious, what is not obvious is that the fulcrum is not placed in the middle of the saving and spending see-saw. Saving a little more early on levers you to be able to spend much more later. Spending more when you are younger on carries a high price tag when you are older, because it robs your savings of the power of long-term compounding.

In most areas and most of the time, over the long run it will be cheaper to buy than to rent, even allowing for the fact that the renter gets to keep his down payment in the stock market. If you hold on to your house for a number of years, it will likely appreciate beyond the various transaction costs of selling and you will discover that you have lived essentially rent-free. The exception to the buying-beats-renting rule would be if you were to buy into a red-hot real estate market near the top: if the market subsequently corrects 40 percent, you will be waiting a long time to recoup your investment, and wishing the whole time that you had rented instead.

When the real estate agent tells you that, “Yes, prices are high, but in five years all of this will seem like a bargain, and I guarantee you’ll make money,” that is often a very good time to run. If the agent talks up some cleverly engineered mortgage product whereby you can live in the house for the first five years with only a one percent mortgage rate, this agent is a tool of the devil.

Catholic and Jewish schools, which are often redoubts of academic excellence, tend to be a much better bargain than the North Shore Country Day School (or your neighborhood’s equivalent) if you don’t mind the religious component – which tends to be a pretty weak cup of tea at this point in any case. (Don’t get us wrong: we like the religious component and wish there were a lot more of it, starting with the Ten Commandments – now better known as the Ten Lifestyle Suggestions.)

Instead of taking the easy way and lusting after possessions that you cannot afford, why not take the road less traveled and practice the spiritual discipline of contentment: it’s the only sure-fire, get-rich-quick scheme in the world–one that gets you rich not just quickly but instantly. The only truly rich person is the person who loves what he has.

If you are a single man or woman, or even a young couple without children, you do not urgently need life insurance. You may not need it at all. But once you have obliged yourself to put a roof over the heads of your children, you must provide some protection for them in case you or your spouse goes to heaven sooner than expected. If you pass from this earthly vale, there will be a giant economic hole in the family’s picture. Not only will there be a catch in the throat when Sis says grace at Thanksgiving dinner, but there will be a big, giant catch when the family opens their bills each month and stares at the blank space on the bank statement where your paycheck used to be.

The first thing is to understand that the reason your income is not rising as rapidly as you would like is because there is not sufficient competition for your labor. Almost no employed person’s wage rises beyond inflation unless people in authority believe that the employee may be hired away by someone else. It is very costly and difficult to hire and train new employees. There can be two basic reasons why there is inadequate danger of being hired away in your job. Either there is a problem about your personal work, or there is a lack of competition in the field.

Why are college costs so out of control? The answer is easy to see. While colleges may be competitive to get into, they do not themselves compete in any meaningful way except in athletics. They have no goals regarding the education of their students and therefore no program evaluation to measure whether they meeting their goals. There is a proliferation of ancillary staff and services that contribute nothing to the education of students. Majors abound in hundreds of areas without respect to any marketplace for graduates in those fields. There are no competence-based standards for graduation that would offer future employers any reason to take the college diploma seriously, although they still do, for now. College faculty work very part-time, and campuses are in full use for only a couple of semesters a year. Given the lackadaisical pace, it’s not surprising to learn that it increasingly takes five years to complete a four-year degree. According to survey funded by the Pew Charitable Trusts, only one-third of students at four-year colleges and universities are skilled enough at math to balance a checkbook. Only 38 percent were proficient enough to read and understand a basic newspaper article. In short, despite the astronomical expense, college is in many cases a scam. Colleges are models of inefficiency, and a perfect breeding ground for malcontents of every description – exactly what you find if you tour campuses today.