“…an amusing and easy read—not words often used to describe a tome on taxes.” – Jonathan Clements

“…a book every investor should have and read.” – Ben Stein 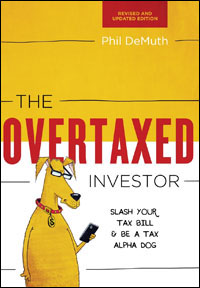 The REVISED AND UPDATED EDITION is here!

We live in a Golden Age of Taxes. The 2017 Trump Tax Cuts and Jobs Act has lowered tax rates for the beleaguered American taxpayer. But the clock is ticking. The tax cuts are slated to expire in 2025, and a regime change in Washington could undo them as early as 2021.

Meanwhile, like grave robbers opening King Tut’s tomb, Congress – with no debate or public discussion – plans to raid your retirement accounts for even more money under the misnamed “SECURE” Act. Hang on to your wallet. This affects one if every four retirement dollars. By mid-century, the Secure Act will extract an extra $4 billion every year from your retirement accounts and ship them to Washington to fund our politicians’ schemes.

I tried to warn everyone this was coming, but the deep pockets of the insurance industry lobbyists prevailed in Congress.

Despite our exertions and exhortations, the SECURE Act went into effect 1/1/2020 (attached to a spending bill that could not be vetoed without shutting down the government.

The best planning move would have been to die before the end of 2019 so your heirs could fall under the old rules. But for the survivors among us:

The Stretch is Dead

Previously, your heirs could use their inherited Traditional or Roth IRA for a lifetime of tax-free compounding; now, they must pull all the money out within ten years.

Exceptions: surviving spouses, children (but not grandchildren) until they reach the age of majority (or age 26 if students), people who are disabled, and any beneficiary within ten years of your age – all of whom can continue to use the standard IRS life-expectancy tables.

For smaller IRAs, accountants joke that the heirs usually withdraw all the money between the time the funeral service ends and when their car pulls up at the cemetery. But for larger retirement plans, the SECURE Act is a giant tax accelerator that is difficult to plan around.

The guiding principle is that we want to take money out of a Traditional IRA (or any tax-deferred retirement plan) when our tax rates are lowest so that our share is the largest and the government’s share is the smallest.

Under the SECURE Act, our heirs can choose when to take the money out of the inherited IRA at any time over ten years, giving them some leeway for tax planning. The payouts could even straddle over eleven years since the final distribution needs to be taken by the end of the ten-year death anniversary. Still, skipping a distribution one year means doubling up another year, which often doesn’t pay under our steeply progressive tax system.

In theory, the top-bracket beneficiaries should pull out all the money at the end of the tenth year, paying the taxes then. Unless this occurs in a bear market, in which case they should have pulled the money out earlier. Since this is impossible to predict, it will make for a nail-biting experience.

Another problem with inheriting a Traditional IRA occurs if your kids receive it when your grandchildren are applying to college, as this will make it harder to qualify for financial aid.

Unfortunately, there is no easy way to put the “stretch” back in the box.

One option is to leave your IRA to your surviving spouse. The spouse can still pull the money out over his/her actuarial lifetime or continue to use your timetable, whichever is optimal. The IRS plans to re-do the withdrawal tables in 2020, slightly lowering the Required Minimum Distributions (RMDs) to match our greater longevity. For people who only withdraw the RMD, this might leave them with a 10% larger account by age 95 than relying on the current tables.

Against this, your surviving spouse likely will be filing single in the teeth of RMDs rising with age, very possibly jumping a couple of tax brackets in the process. If the money is not needed for consumption, the smart move is for your surviving spouse to disclaim it and let the IRA go to your secondary beneficiaries, typically your kids – unless they are in a higher bracket than your spouse.

A Roth IRA, on the other hand, should ideally go to a surviving spouse first to preserve the stretch over his/her lifetime, and then pass untouched to your secondary beneficiaries. They, in turn, should sit on it for a decade before pulling out everything on the last day of the tenth year. But they also will have a tricky decision to make every year along the way: should we pull the money out now, or try for another year? But what if the market goes down? But – what if it doesn’t?

Leaving a retirement account to a trust is problematic under the Secure Act. Many trusts have language that say to only take RMDs – but under the Secure Act, there are no RMDs until year ten, when all the money would come out at once to be taxed at the highest rates.

There are two types of trust commonly used to receive IRA assets, and both are questionable.

A “conduit” or “see-through” trust passes the proceeds through the trust each year directly to the trust beneficiaries. But then, why use a trust at all? Why not just name the individuals as the IRA beneficiaries in the first place and skip the trustee and a decade’s worth of trust expenses and trust tax filings?

The ”sprinkle” or “discretionary” trust gives your trustee discretion in how to parcel out the RMDs. For example, if your kid gets sued, the trustee can avoid making a distribution. But trust tax rates hit the highest bracket at $12,951. Given the expenses involved to maintain this apparatus, discretionary trusts are only for cases where you do not trust the beneficiaries to receive the money directly.

As attorney Natalie Choate, who wrote the book on the subject, says, “It is almost always more desirable to name individuals to be beneficiaries of a retirement plan whenever possible.”

Here is a cheap-and-easy solution: Divide your primary beneficiaries so that your kids get a portion of your IRA when you die, and then have them inherit the second portion after your surviving spouse dies. This way the kids receive two successive (possibly overlapping or possibly gapped) ten-year IRA distributions, pulled out in smaller increments and so taxed less heavily.

A simplified example: You have a $1,000,000 IRA. You set up your IRA beneficiaries as follows:

Then, when your surviving spouse dies, they inherit the remaining $250,000 apiece. Now the clock starts again, and they each take out another $25,000 over ten years.

Since everyone is taking smaller distributions over an extended period, there should be more money for the family and less lost to taxes.

The smaller the units into which you can divide your IRA, the smaller the RMDs and the lower the amount that goes to the government. I estimate that if you left a $19,000 IRA to a 14-year-old grandchild, the child would limbo under the “Kiddie Tax” with the small ensuing RMDs (assuming no other income) and pay taxes (if any) at his own rate. It would be a nuisance for his parents to manage but if the alternative is giving half the money to the government, it might be worth it.

This is the idea I dropped in the Wall Street Journal.

You set up a Charitable Remainder Unit Trust (CRUT) and make it the beneficiary of your IRA. The trust reserves 10% of the money for final distribution to charity, which can be your family’s own donor-advised fund. In the meantime, you control the CRUT investments. It pays your beneficiaries a fixed annual percentage of the balance every year. For maximum benefit, the payouts should stretch over the lifetimes of the CRUT’s income beneficiaries.

The CRUT is most useful when the donor is worried about handing a large distribution to the beneficiaries at one time and wants to structure a more gradual payout. The economic merits of using the CRUT vs. taking the distribution directly from an IRA during the 10-year payout need to be calculated using the particulars of your situation. You could hedge the risk of a CRUT beneficiary dying early by using term life insurance, which is usually inexpensive for a young person.

There can be an estate tax deduction for the initial 10% donated to charity (if there is any estate tax). The CRUT also will leave some philanthropy dollars for the grandkids to dole out from the family donor-advised fund.

• You don’t have to start taking your RMDs until age 72, unless you turned 70½ before 2020, in which case you continue to be governed by the old RMD rules.

• If you have earned income, you can still contribute to your IRA past the age when your RMDs begin.

• Anyone over 70½ can make Qualified Charitable Distributions (up to $100,000) even if they have not yet started taking required minimum distributions.

• The Kiddie Tax reverts to the old rules, where the brackets are set by the parent’s income and not the ridiculously high Trust tax rates.